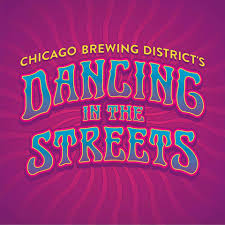 Dancing In The Streets is the brainchild of On Tour Brewing Company founder, and major jam band fan, Mark Legenza.  The West Town Chamber of Commerce (WTCC) works with On Tour Brewing and the Chicago Brewing District to produce this one of a kind craft beer and live music event on Hubbard Street in West Town Chicago! The 2020 event will go VIRTUAL and feature live streamed music on Friday, August 7th from 6-10pm, plus local brewer, retail, and restaurant specials August 5-12.

Dancing  In The Streets is the name of the event, and also a popular Grateful Dead song. Local blue grass and jam bands booked by On Tour Brewing will be featured in the live stream. The event dates were chosen specifically to coincide with the “Days Between” which is the name of the week between August 1st, Jerry Garcia’s birthday, and August 9th, the date that Garcia passed away.  That week is known as the “Days Between” in celebration and in memory of Jerry Garcia.